New Year
I’m not doing resolutions this time in an attempt to avoid adding to the perpetual dissatisfaction I already feel with myself.

Happy New Year, by the way.

Some traditions die hard simply because they are never meant to. I pretended my dad was with me and made a special Dutch new year treat: ‘oliebollen’. Chewy doughnuts with raisins, without the hole in the middle. Sort of. Unconventionally, in a Wok. A little cultural mixing in Marjo’s little Idaho kitchen. 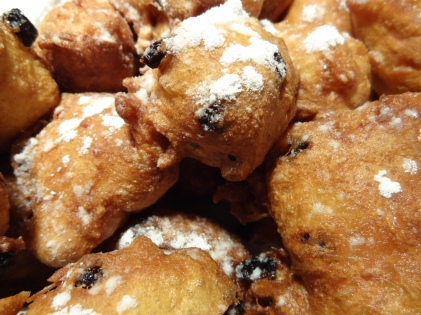 It was 3pm and therefore midnight in the Netherlands so I called my parents. They let me listen to the fireworks while I turned over my oliebol in the oil.

Of course I casually reflected on 2014. I would be lying if I told you my year was dull and not worthy of remembering.

– David and I reached our destination of Ushuaia, Argentina. With that David’s journey, which he had set out on in 2008, finally came to a close.
– I came to the United States (first time) and went on a crash-course road-trip filled with USA history books and interesting conversations with its citizens.
– We found a place to live (finally) and signed a rental agreement for a small place in Sandpoint, Idaho.
– I embarked on the immigration process in the United States and received a permit to work.
– We got married.
– My father turned 50, my grandfather turned 80 my father in-law turned 80. (Not sure why that’s so great, everyone does have a birthday at least once a year it seems.) 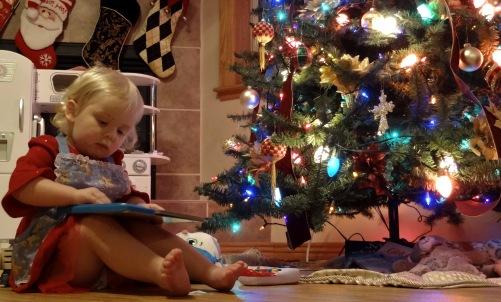 Zephyrne With Her Gift By The Tree

Christmas dinner at Victoria and James’ place. Victoria is David’s stepsister since he was a teenager.  I was given the opportunity to impress with my culinary skills (what skills) by making mashed potatoes (ooh).

Now I’m Dutch, so I know something about mashed potatoes (we eat it about three times a day).

So David mashed while I seasoned. Whopaaa…nutmeg in.
David: “Nooooo! Too much nutmeg!”
Victoria: “What? Nutmeg? NO!!”

By now the whole house was falling over the assumption that I’d completely ruined the potatoes (Americans not being acquainted with the sacred nutmeg-potato matrimony). Not sure Americans trust anything besides salt, pepper and cinnamon actually.

In the end everybody loved my mash.
Obviously. 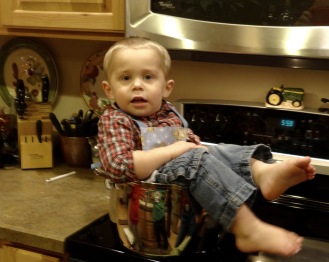 Well Then…. Let’s Cook Something More Interesting! (No Children Were Harmed in the Making of this Photo)

So when the party was over (it was 6:30pm people!) David and I went to Main Street and found one of those bars where ugly people get laid. It was just too early for Christmas to be over. We had a few drinks, played pool and laughed a lot. We held out until nine (whoohoo!) and plundered the gas station for a bag of crisps.

Sledding
On what Dutchmen call ‘The Second Day of Christmas’ and Americans ‘Boxing Day’, I walked through the fresh snow (15cm) to the place where we’d seen a horned owl up close the night before. The hill there was full of activity – children, teens and adults sledding down on all sorts of plastic creations (or a mattress in one case) while Walmart receipts flew by in the breeze. So after lunch David and I went over and had the most of fun flying down the slope, separate or together.

Piling up jointly on one sled was the best. All three times we made it all the way to the bottom, though about half-way down on all occasions we started screaming as we lost control and powder snow got kicked up into our noses and underwear.

Once I fell so hard that I tumbled far down the hill and watched my sled fly overhead making a nice contrast of pink against the blue sky. Another suicide-mission had me going straight for a man kneeling down and as I yelled “coming in!!!” Only then did I see a little girl with him and thought ‘SHIT a kid!’ So I threw myself off my sled with all my might and missed them by a hair…

The sun went under and shone gorgeous salmon-coloured on the mountain range as we walked home, still giggling like children. “Did you see me hit that guy?”

By the way, it’s been called Boxing Day – in all countries that were once part of the English Empire – since the 1830s, when tradesmen would be given a Christmas gift box by their employer.

We drove home and into a snow storm on Saturday.

And we close with a few random winter wonder land (now you’ll have that annoying song in your head) pictures of the snowfall in Sandpoint over the last week. 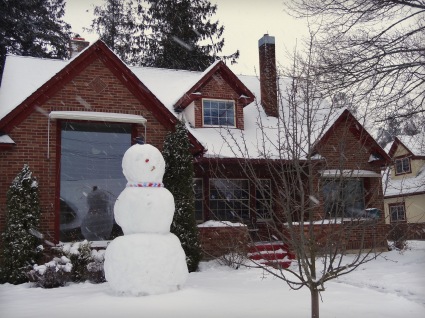