“The poor are happier than the rich,” I have heard myself and others say, or “because they have less, they have less to worry about.”
Now I question these theories and wonder whether we only say it to feel less crappy about the exploitation of these people, driven by our own material goals. And the argument that we are ‘supporting their economy‘ by extraditing the harshest labor is absolute rubbish as well. Your money goes to the fat men of large corporations.

Sorry to break the bubble.

Perhaps we have gotten so hooked on wanting all the good things others have (in this case: the bliss of ignorance), that we feel justified in our envy. And when jealous we don’t feel sorry, because they have something we want.

Columbia – People waiting to get onto a local bus, Nicaragua

WE ARE SPOILED
Clearly it is not true that they are more pleased in life than you and me. The people in Latin-American towns and villages look rough, unhappy, malnourished and lonely.

We live in a society that thrives on individualism and are thrilled when a stranger starts talking to us on a bus. In poor societies I’ve been met with the greatest openness and a genuine smile. This heartfelt kindness makes our bodies glow with pleasure and deceives us to think these people are happy. Their strong family values and tight communities strike us. They give generously to one another on a personal level and it makes their lives look brighter and more meaningful than our smartphone-filled, Facebook-ruled existence.

However, this is all they have. Personal interaction and their reliance on a neighbor. When any of them chooses to withdraw from their community, they are left to fate. Survival chances drop dramatically when you stop investing in your community. You cannot afford to be nasty to each other because it jeopardize your existence. 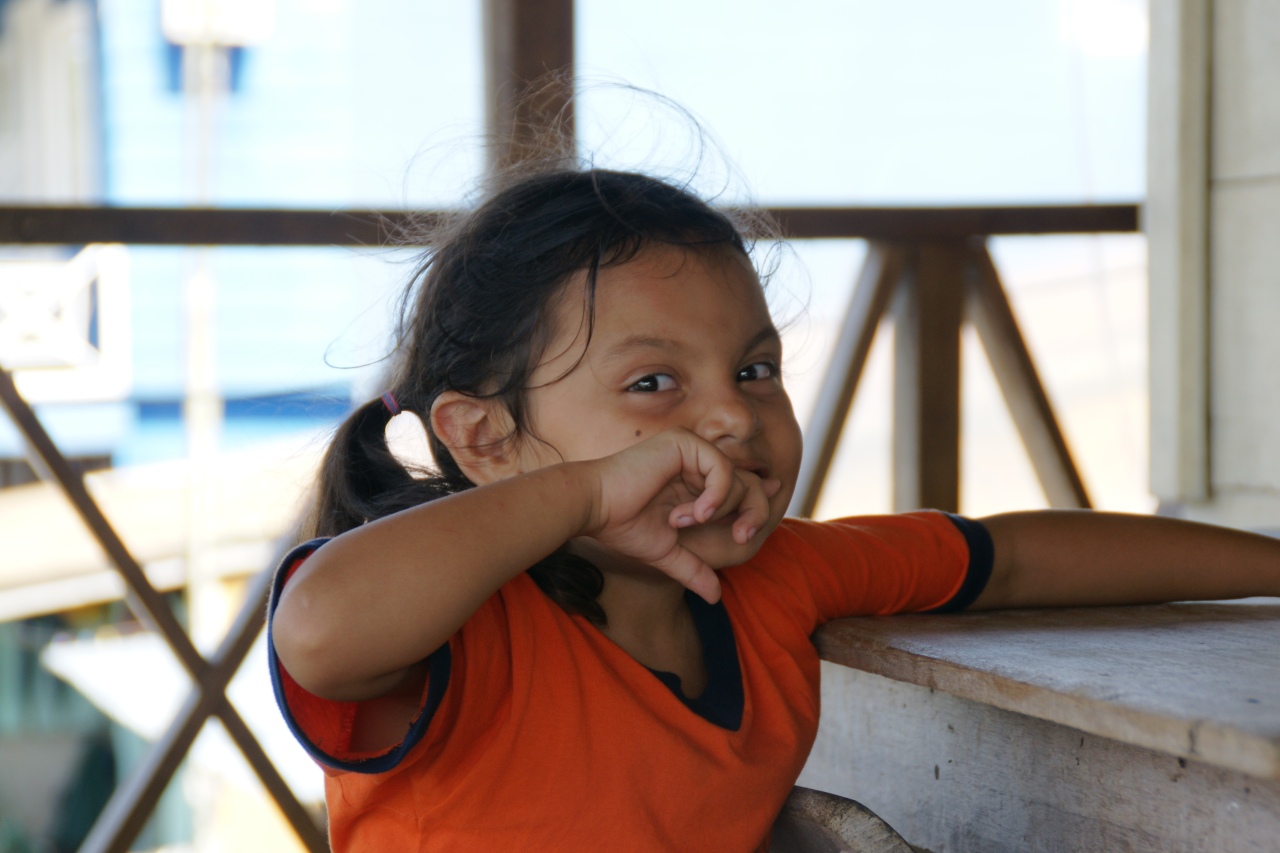 Nicaragua – The barefooted girl loves hanging out with me (Marilin-tin-tin). She exhibits no hostility or judgement. She plays curiously with my expensive camera.

THE POOR LADY SMILES
We see poverty and cheerfully exclaim “What a beautiful culture they have” because women in home-made traditional clothing selling their own potatoes in the street is marketed to us as being a beautifully cultural experience.

Guatemala – ‘Stick, mister?’ Children pushing a rental hiking stick to tourists. They are happy receiving a pack of cookies in exchange.

Meanwhile they do what they have to, to survive.

The reason the poor lady smiles when she sells me a plate of fish, is because she has no reason to personally dislike me. She just does her job without thinking too much, which would bring forth judgment and hostility.

Day in day out, cooking fish and rice in a hot kitchen standing up. Her feet hurt because she has no money for proper shoes. This makes her back ache even more, especially as she has no means to visit a physiotherapist or any other doctor. Pain killers are expensive as well, and any family or the state feels no obligation to help her.

There is a 50+% chance she is a single mother, struggling to put her children to school. The boy has first right of education; her daughter can always take over the kitchen. The young girl is given a fair chance, in one way… but in another not at all.

CHOICE
Poverty in the end is all about choice. Any person who is restricted in their freedom to choose, is ipso facto poor. The choice of going to school, having a career, to choose children or not, to go to a hospital when sick, to have company when needed, to sleep in a warm place when cold, to eat when hungry.
Look around you. Close by you’ll always find someone in need of help. You just have to pay a little more attention than in Bolivia, where it is in your face all the time. 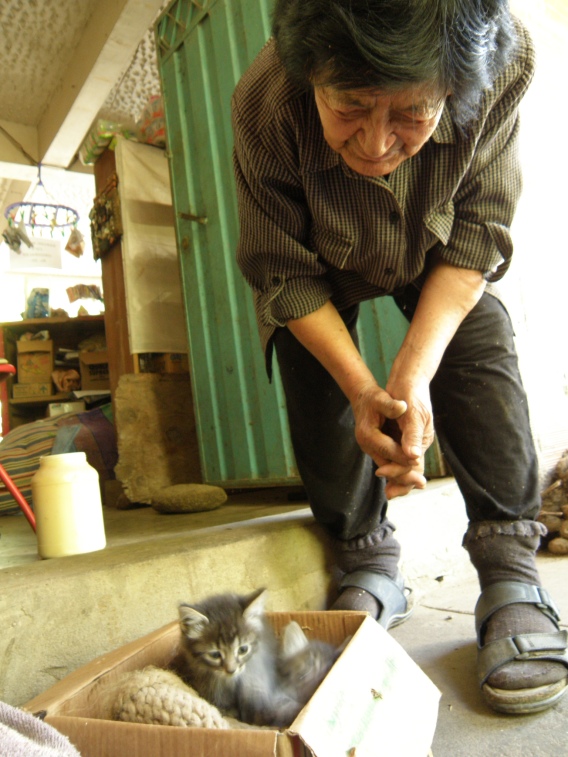 Bolivia – Poor or happy or both?

This lady runs a small hotel just outside a remote Bolivian village with a couple of 2×3 m rooms. Her husband is slowly dying of prostate cancer and her two daughters don’t come by anymore. Nonetheless she offered us everything–food, drinks, service–while we could hear the horrible moans from the other room, separated only by a sheet on a line. She excused her man’s noise explaining they had not been able to buy the required medicine to relieve his suffering. He is no longer willing to make more trips to the hospital, which is hours away by bus on a bumpy dirt road twisting through the mountains. All I could do was leave $20 and paper hearts after our stay.

Ecuador – The old man smiles. It’s just him and his llama doing the work today

LONG EXPOSURE TO POORNESS
After more than a year of living among the poor Andean peoples I said “It is almost frightening how one can almost become immune to the poverty after seeing so much of it”.
But I now acknowledge that long exposure does affect me. Seeing this much poorness makes me feel sad and hopeless. I have been observing the unpleasant side of humanity–the miserable half of the world–for many years now (that half being more like 85%).

Belize – Manu (66) is a recovered alcoholic and lives alone in Belize as a caretaker at an abandoned theme park. His house was burned down, wife and children left. Now he spends his days patrolling and cooking his beans and rice. He cried when I left after three nights for he is very lonely. We still write letters now and then, in one of which he asked me to marry him in broken Creole English. I sent some money to help him care for his newest daughter, conceived with a local 21-year old woman.

Travel has become hardship to me. The poor ladies selling candy, and the homeless children shining shoes, living under trees and bridges. They confront me with my simple fortune of being born and raised in a European country. I am conscious of being privileged to the extend of almost feeling guilty, or somehow responsible for their misfortune.

So I quote Paul Theroux: “Travel at its most enlightening is not about having a good time.”

Peru – Three brothers roaming the streets of Iquitos. They live in the city’s slums (background). Built on the banks of the Amazon river on stilts 8 meters tall, the water will rise to their doorstep.

So can I do anything for these people who cross my path every day? I cannot fix any life if I tried. But support on a small scale can matter a lot. Not being able to fully mend the misery is no reason to be passive! So I buy whatever I can from the poorest looking women and children and avoid big supermarkets. I tip the small girl who helps in her mother’s shop and cannot go to school. I buy lunch for the boy who comes into the restaurant to sell chocolate, then give it away to someone in the street. But I won’t give to the drunk bum who harasses me in the park for small change. Or the gloating touring guide, who’s skilfully learned a few English sentences so he may collect from the visitors who only stay for a week.

STICKY PAIN
People avoid exposure to pain and loneliness because it is sticky. Misery is contagious because we are empathetic beings and we care. We come up with reasons not to visit our friends dying of disease after a while, because we feel shitty after coming back from the hospital. It’s hard to see pain when acknowledging one’s inability to mend it. The easiest thing to do becomes to close your eyes. As a child it worked: I can’t see you so you don’t exist. Can’t feel bad when I don’t see the pain. Now that’s a choice. 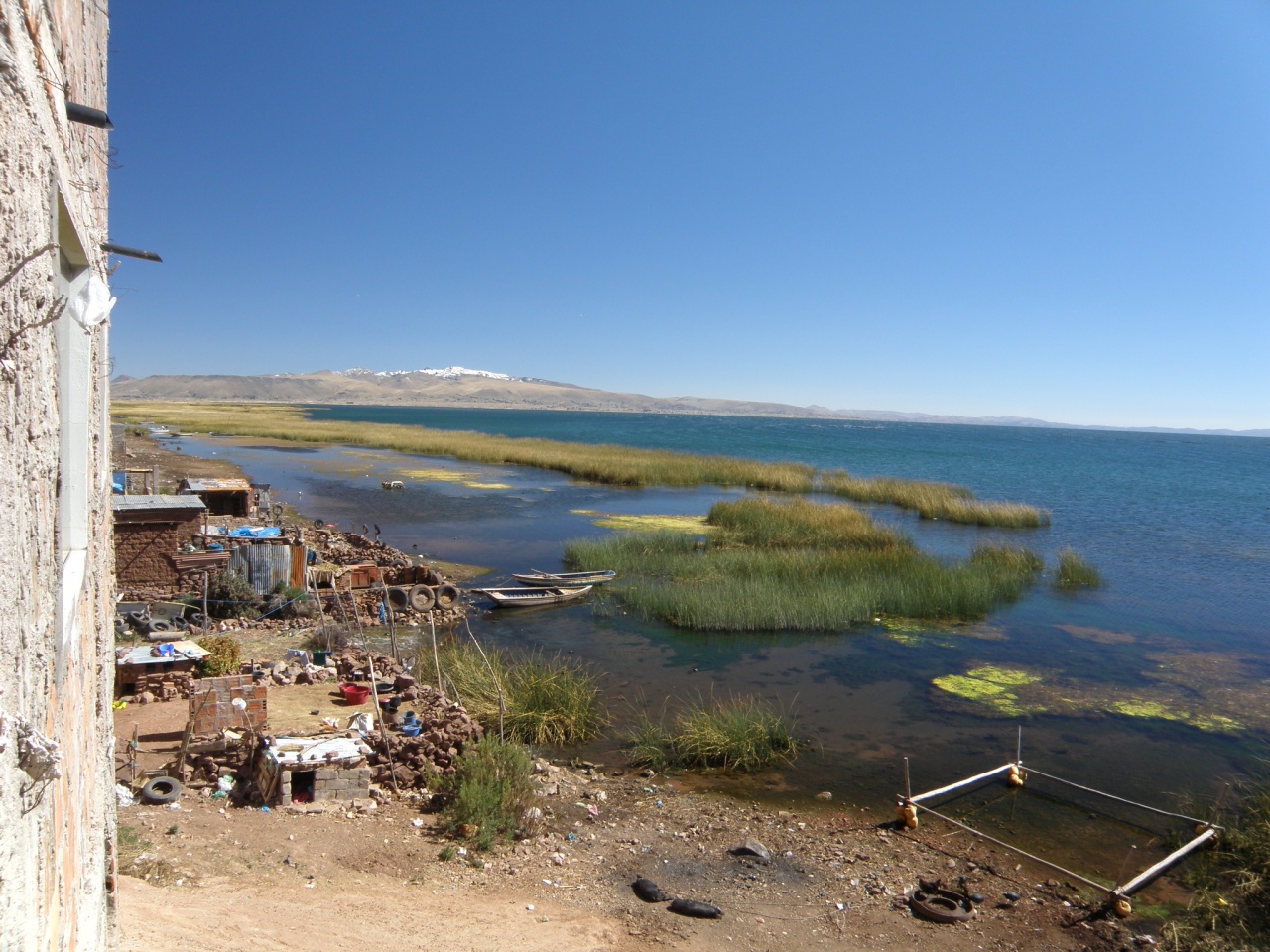 Peru – Trash gets dumped in Lake Titicaca. Where else can it go? No-one will pay for such a strange thing as trash pick-up service, and the government has better places to put their tax money.

Does feeling bad change anything about another person’s disease? No. But awareness encourages more empathy. Take less, give more. Volunteer without expecting anything back. Selfless giving is generosity, offering at a condition is ego-driven. Doing something for another person in order to feel good about ourselves is volunteering to receive, not to give. I’ve been there too.

So start around you. A neighbor, and old family member, a beggar, an orphan, a sick friend. Cook, clean, take someone out just to see the sky. Use less water and electricity, stop buying stuff you don’t need. Empty your wardrobe of clothes you don’t really wear anymore and donate them. Buy things second-hand to reduce waste, eat locally made products, take the bicycle to work. In short; investigate and choose with conscience.

Manu still has his pride. He puts on his T-Shirt and holds his chin high when I take his portret.