Be Informed About the American Redoubt

By mgrootn00August 28, 2017
Asking the people opposing our own ideals to listen and be better informed, we should be doing the same, so here are some resources to learn more about the American Redoubt:
Wiki (https://en.wikipedia.org/wiki/Redoubt):

A redoubt is a fort or fort system usually consisting of an enclosed defensive emplacement outside a larger fort. It is meant to protect soldiers outside the main defensive line and can be a permanent structure or a hastily constructed temporary fortification. The word means “a place of retreat“. Redoubts were a component of the military strategies of most European empires during the colonial era.

The American Redoubt is a political migration movement first proposed in 2011 by best-selling survivalist novelist and blogger James Wesley Rawles which designates three states in the northwestern United States (Idaho, Montana, Wyoming), and adjoining portions of two other states (eastern Oregon, and eastern Washington) as a safe haven for conservative, libertarian-leaning Christians and Jews. Rawles chose this area due to the low population density and lack of natural hazards.
(…)
“For a growing number of people, it’s the designated point of retreat when the American economy hits the fan. When banks fail, the government declares martial law, the power grid goes down.”
(…)
The American Redoubt movement continues to grow. An August 2016 article about the movement in The Economist magazine mentioned that “thousands of families” have now migrated to the American Redoubt and that the movement is “quietly gaining steam.” (…) As of 2016, it has been asserted that Republican Party politics in Idaho’s northernmost legislative district have been pulled farther to the right in recent years with the arrival of conservative Christian “preppers” fleeing more populated states. 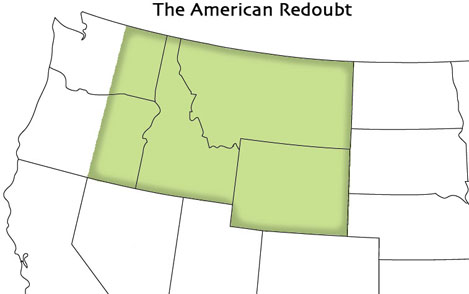 The way I understand it, Redoubters are not necessarily preppers and they are not necessarily right wing extremists. Nor are they all racist, though many of them are. The place they choose to retreat to is selected based on perceived security for when social mayhem erupts. The lack of diversity in our area hypothetically means that they won’t have to engage in the ‘fight’ that is brewing in the US between groups that are becoming more divided, whether this be political affiliation, social ideologies or ethnic culture.

In north Idaho, the narrow panhandle that stretches to the Canadian border, many people on the streets of pretty towns such as Coeur d’Alene, Sandpoint and Bonners Ferry have never heard of the American Redoubt.

That’s mainly because of the prepper ethos of privacy — most don’t even tell their neighbors they have years’ worth of food in a safe room.

I have talked with redoubters claiming that the proposed Scotchman Peaks Wilderness would be effectively handed over to the UN, but also to kind, calm people who are worried that the palpable undercurrent of dissatisfaction may instigate extreme rioting or civil war, and they simply want to avoid being in the middle of it. They flee the potential of terrorist attacks and economic meltdown — which is higher in large cities — and seek “defensible” property, fertile soil and a largely Caucasian community.

“I have met many people, especially recently, who have moved here after being inspired by the idea of the American Redoubt,” she said. “I haven’t heard any of them speak about the ‘end of the world’ but rather the appreciation for a simpler and safer life.”

Redoubters stand apart from white supremacist in activity. Recently voiced intent to rally in cities across the country come from white supremacists, while redoubters prefer to sit quietly on their 20+ acres of woods with nuclear-war resistant bunkers, market shares in precious metals, freeze-dried food and 50,000 gallons of propane gas buried in the backyard. They are peaceful participants of the community and are more frightened than they are in support of the acting violence of supremacists.
Yes, some redoubters are racist, aggressive and paranoid, but we should not generalize them as such. Mass migration of people to a places where they felt most secure has happened throughout history: Christians, Muslims, Jews, Mormons, Mennonites and Huguenots all did so.

I don’t like the political influence the American Redoubt is wielding in my area, and I don’t agree with many of their ideas. I do distinguish a widespread strong current of rebellion and anger toward our national government, which, to some degree, I empathize with. It is my personal opinion that most redoubters have their heads stuck in the sand and their approach to find solutions to what they dissent is silly, irrational and at times bordering the bizarre. They appear unable to listen, take part in a respectful debate, or find the right place and time to express their opinions. But then again, I believe that’s called freedom of opinion.

Here is a Washington Post article and video published a year ago: “A Fortress Against Fear”
http://www.washingtonpost.com/sf/national/2016/08/27/a-fortress-against-fear/?utm_term=.287b869500d8

“Here, a black person, they’re a novelty,” Walsh said. “You’ll see people walk up to black people here sometimes and just talk to them because they’ve never spoken to a black person before.

Here is an article describing one of Sandpoint’s battles around hosting refugees: “Facts, belief clash at refugee talk”
http://www.bonnercountydailybee.com/front_page_slider/20170817/facts_belief_clash_at_refugee_talk
And here’s the Redoubt version (including full video recording — go to 1:50 of video 2 for some rowdy locals — of what happened: https://redoubtnews.com/2017/08/refugee-resettlement-bonner-county/