A New Phase Of Life

High school was the best. Everything was new and each day thrilling. Each book, painting, touch, song. I had no boyfriend during those seven years. Ever. Except that one guy, Martin, who called me after a few weeks of awkward fumbling to say he was more attracted to men, and all my friends said “Well, duh”.

But there was silliness and art and film and theater and so much laughter it ruled our lives. Close gangs of friends — the outcasts of our year — relying on each other to learn about life, values and physicality. Thank you Ana, Steef, Ruub, Miep, Jo. Oh the laughter!

I accepted my weirdness and was embraced by the prominent league of teachers at our 1,000-student school. Content began to bore me when I was 15 so I dropped a level and spent more time investigating graphic art, literature, theater, psychology and body language. And whether or not I could take a nap while riding my bicycle to school.

Yes, I was also nervous and inexpressibly insecure. It’s most uncomfortable to observe the shape of your body change so rapidly, and to notice the boys and men observing this transformation with equal curiosity. At the Christmas gala (our version of prom), a classmate’s uncle dressed as Santa uninvited stuck his tongue down my throat. I skipped class all the time but always got away with it (how?) and insisted on being on stage, blundering my way through each public performance. There were many. 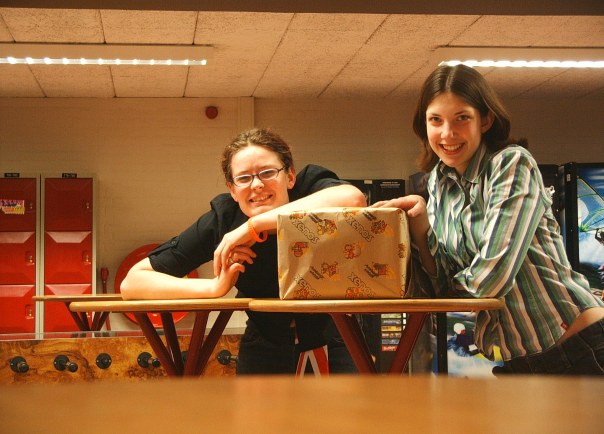 Mystery parcel for the principal

Lately I’ve been reflecting on that time, because some days I feel bored and I long for a different situation that might bring more thrill. I wonder if I should be doing something else. But no matter what you do in life, you’re always missing out on something. More precisely — all of the other things you’re not doing at that time.

I missed out on the party-laced college years; I was traveling the world. I never went on any dates in high school; I had sophisticated emotional connections with adults. I didn’t learn to drive a car until I was 28; I spent years on ‘chicken buses’ in Latin-America.

Nesting, safety and predictability appeal to me after ten years of unsettled adventure. But at times I feel disappointed. Sometimes I want to reclaim that excitement of when each moment was fresh. But I realized something — settling down doesn’t mean life will be dull; it’s simply time to start the next phase of life.