The air is brisk and smells like lit fireplaces. The sun is just about to set and after two long days of driving we finally pull into our final destination and new home. 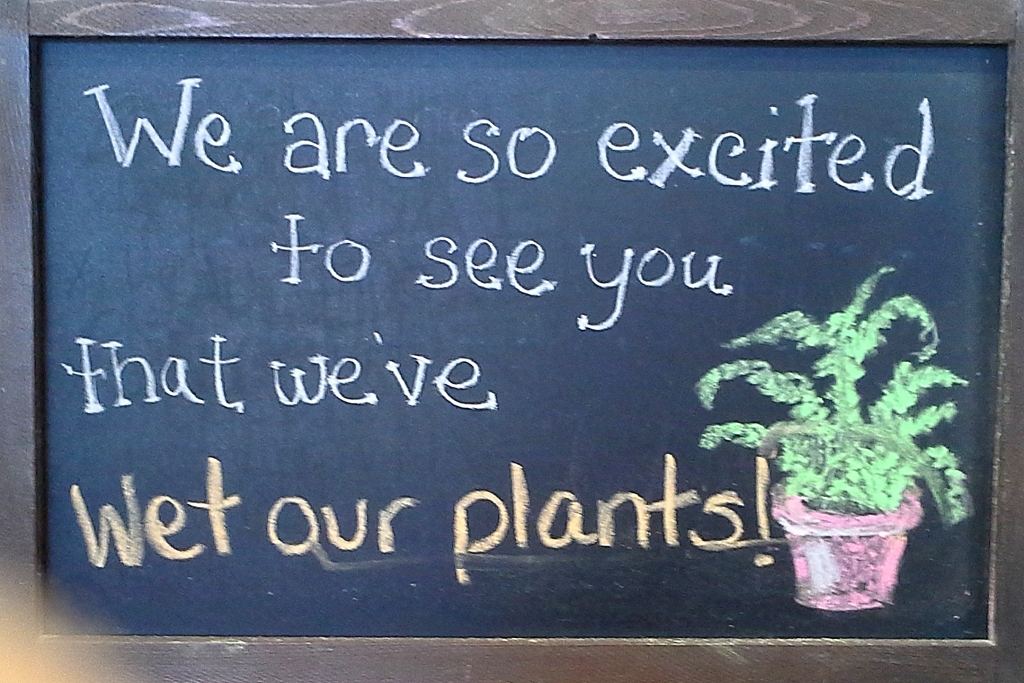 We were able to stay in the spacious home of a friend we had met on our road-trip in July, while he was away on a trip. The very next day we set out on a search for an apartment to rent and found a suitable place in a fourplex on the older side of town, a one minute walk from the lakefront. 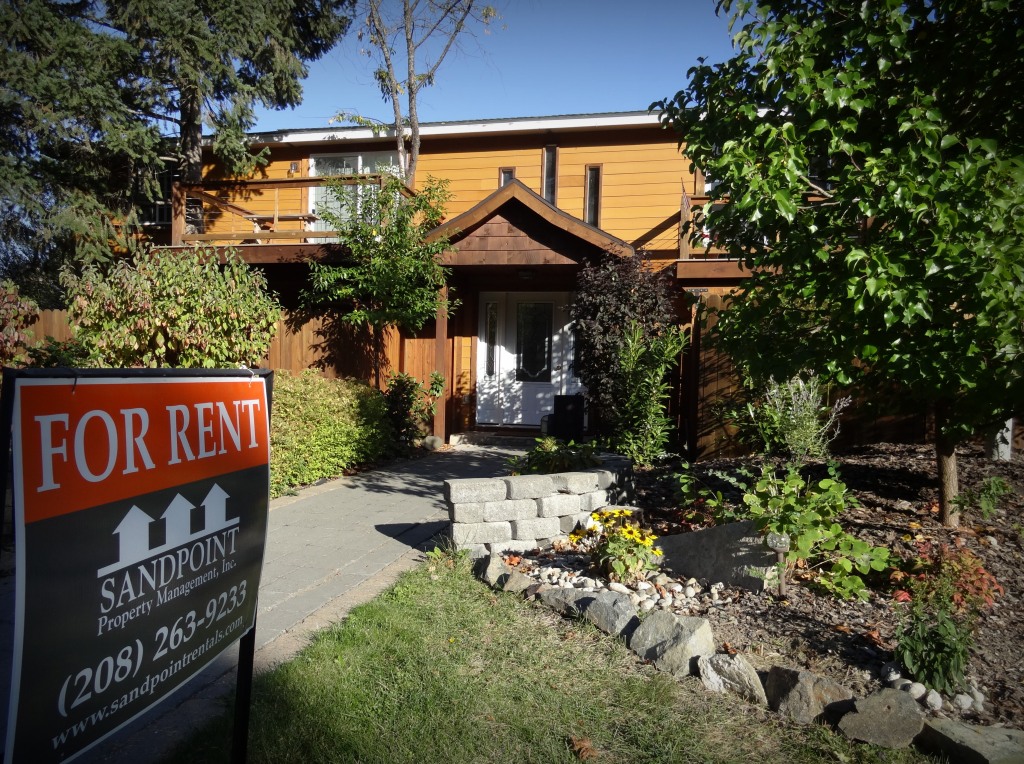 Within days we planned to meet up with Gaea, a good friend of David’s uncle Michael whom we had stayed with only weeks before. Michael had mentioned her living in Sandpoint after we’d already settled on moving there and David remembered meeting her on several occasions.

She invited us to the winery and we got along very well. Over the following weeks she invited us for wonderful evenings at her home, while introducing us to her friends. It sure is nice to have a familiar person nearby to show you around a small town like this.

Many people that moved here did so after visiting, much like we did. Because the winters can be long and grey, Sandpoint has avoided being developed into a Disneyland for adults like many places have (Ashland / Bend, OR). We didn’t meet any people who were native to the region at first, but after a week or two the circle expanded some and we made more acquaintances. 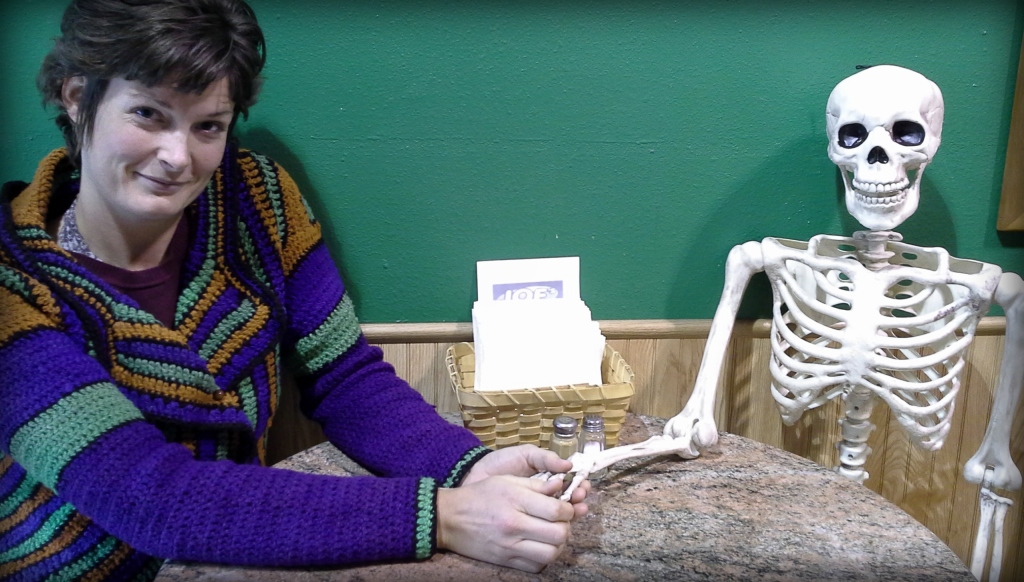 I hope I didn’t Bore you to Death…

The Panida is a small theater where we went to see the film ‘The One Hundred Foot Journey’ one Thursday night. The ‘key’ of the digital projection was not working and we were asked to have patience until this was sorted out.

Very soon two girls of about eleven climbed the stairs to the stage, giggling like crazy. This was their opportunity to perform some gymnastics they had learned and to tell jokes.

Everyone wants fifteen minutes of fame.

Why did the skeleton cross the road?

He was going to the Body Shop.

The whole room laughed and the girls were encouraged to keep going.

More skeleton jokes were told (it’s almost Halloween at this point) and cartwheels were done (NL: radslag). Airplanes, handstands and other tricks were performed without shoes on and with care because ‘I don’t want to fall on my head’, she whispered to her friend.

‘Does anyone know more jokes?’

They asked hopefully after having done every trick they knew. Now the manager came up –a jolly lady in her late thirties- and informed us it would be a little longer still.

‘We don’t want the movie!’ yelled an older man from the crowd.

‘Do a cartwheel!’ pleaded another to the manager.

So the girls continued their show doing repeats and taking requests. Then a lady walked forward and gave a dollar. More people wanted to, and so one of the girls’ boots was passed around the room and came back stuffed with money. They had a blast! 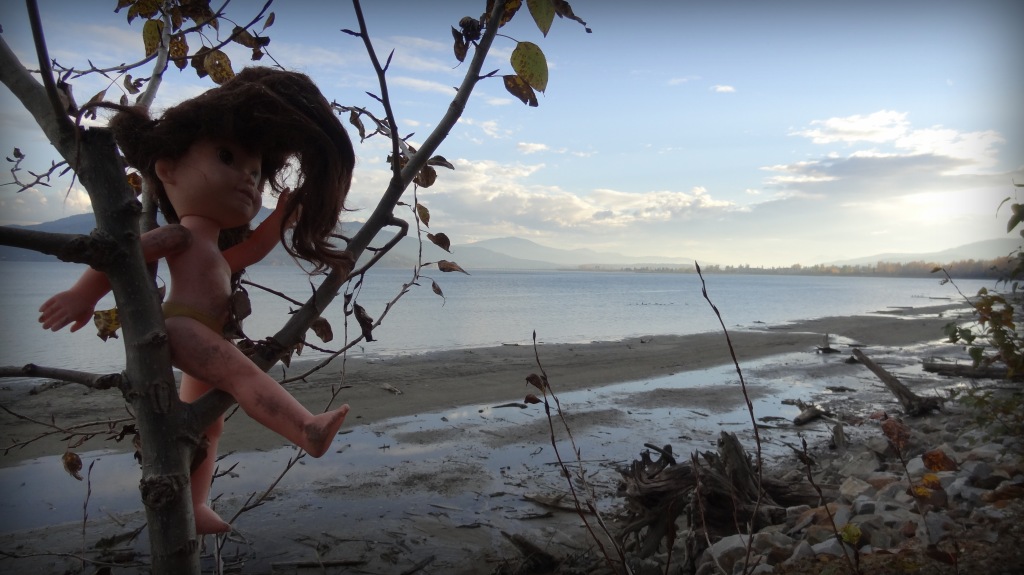 Sandpoint is known for having a Great variety of Artistic Characters

WHAT DOES ‘COMMUNITY’ MEAN?

People we had never met before invited us to stay in their home while we set up. Others have offered to help us find work. Community means looking out for each other and striking a balance between acting from a sense of responsibility while at the same time accepting charity when offered.

We found a wallet in the street at night and walked over to the police station to hand it over. The office was closed and no-one answered the door. We found a phone number in the wallet. The lady who answered hadn’t even noticed it was missing. Nothing had been taken from it and when we dropped it off at her friend’s home, they had been instructed to offer us a bag of carrots from her farm as compensation. These were the best carrots I’ve ever had.

On October 20th we moved into 421 S. Third Avenue. Our landlord lives underneath us and is a cool guy named Danny. He’s travelled all over the world and we have already become good friends.

We have been slowly furnishing the apartment, mostly buying used items from consignment-, and thrift stores to reduce waste and keep a sensible budget. I don’t have a work permit yet and David still needed to go back to L.A. to pick up the last of our things.

So, on the 24th he left in his little silver car with California plates that gave him away so well being a visitor and would be gone for ten days. 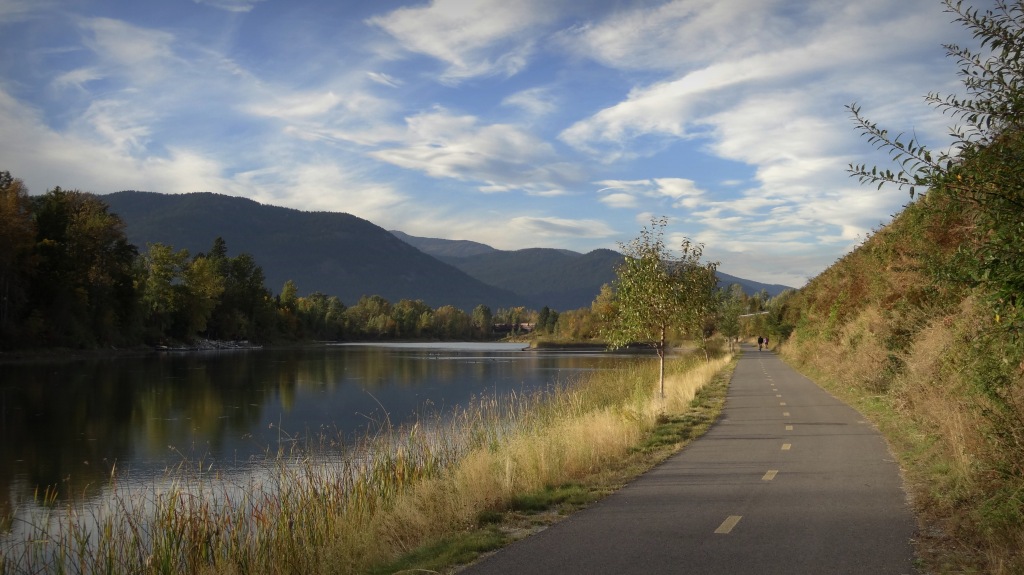 On the day of Halloween (October 31st) I had coffee with a friend. One of his buddies had an extra ticket to the adult’s party down town and he suggested I’d come. So I dressed as a burglar and prepared to have a blast.

Sandpoint is not shy to go wild. Sir Mix-a-Lot (Baby Got Back, you remember if you’re from the eighty’s) had been invited to play and bragged how he’d once bought a $300,000.- Ferrari.

But Sandpoint winced and frowned where L.A.’ers would have cheered and had spontaneous erections. I calculated that this guy was paid less than 10,000 bucks to perform here with his group.

The one-hit-wonder in denial.

There was an Indiana Jones, at least three Jokers, Romans, Spartans, Cruella DeVil, Alices in wonderland, cops, pimps, skeletons, Jack Sparrow… and the Seven Dwarves, but only four of them. The waitresses were all dressed as (busy little) bees. I really had fun with my costume and got ‘arrested’ several times by the police women in the room, though I persisted that all that jewelry on my belt was truly mine.

Things seemed mellow overall apart from two Jokers making an attempt to fight, but they were actually too drunk to do any harm. Like everyone else. 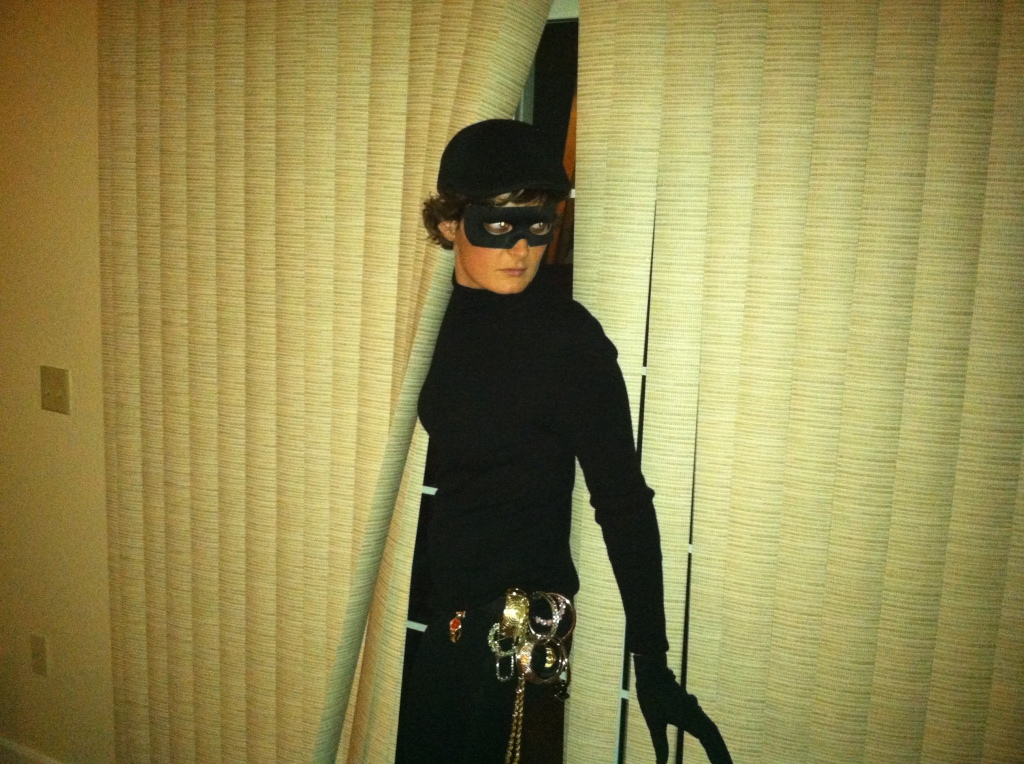 David got back the 2nd of November and we continue to meet people and slowly turn the house into a home. I feel comfortable and confident in town, fixed myself up a nice old bicycle that makes me feel at home and we are getting familiar with the surroundings.

Schweitzer Mountain Resort is only 14km away and winter sports are very popular for the people of Sandpoint. Lake Pend Oreille is fed by the glaciers around and offers a lot of activities in summer. Creeks and rivers flow in all directions from Sandpoint, which itself is flat like the Netherlands because it sits on the Pend Oreille River outlet. Birds are abundant and I’ve had the pleasure of meeting the areas leading ornithologist already. 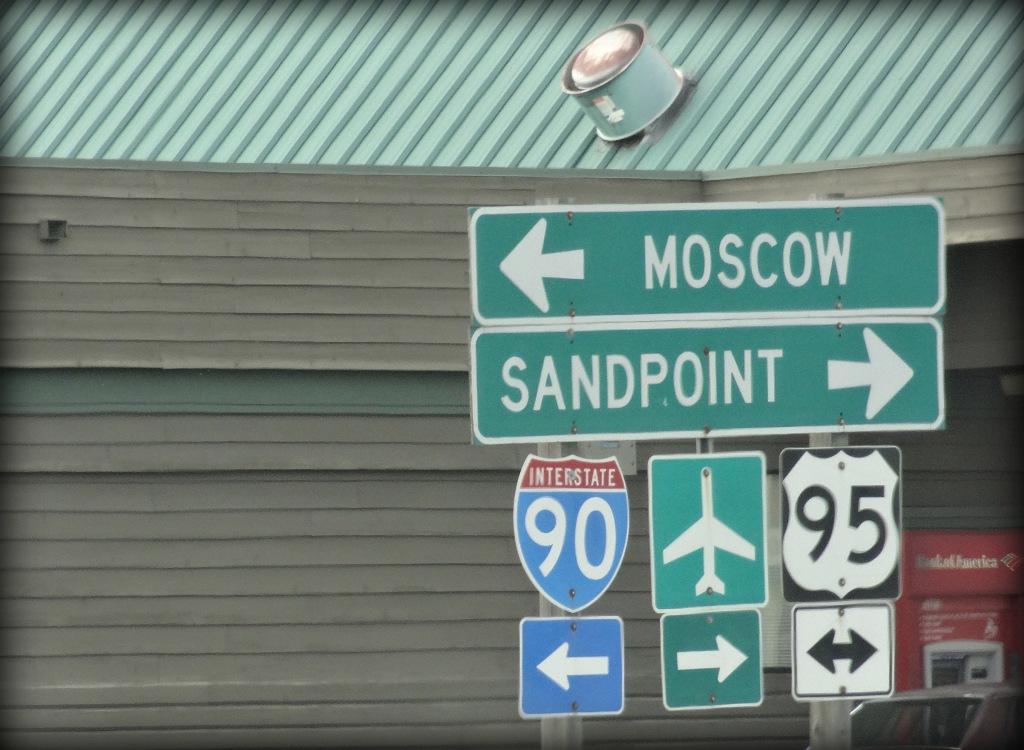