From mid-November to 6 December throughout Europe the Sinterklaas [sɪntər’klaːs] tradition is celebrated. In the Netherlands there’s been a lot of controversy after international and domestic criticism has been growing around the character of ‘Zwarte Piet’ (Black Pete). Piet is the black helper of Sinterklaas, an old white dude in Catholic clothing. 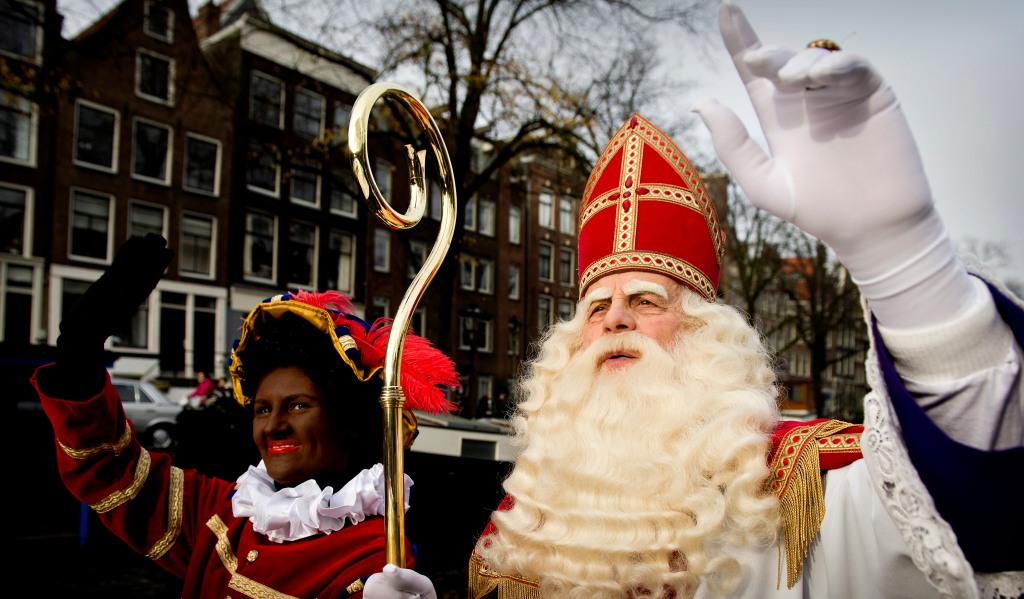 Sint
Though his robes can easily be distinguished from a true Bisshop’s by anyone remotely familiar with Christian apparel, Sinterklaas is in fact based on Nicolaas van Myra; the patron saint of Amsterdam who died December 6th 342 A.D. He was canonized in appreciation of the legend that he’d either:

Muslims stole his remains in 1087, and although that has nothing to do with this story, it is funny to recognize how much we like to quarrel over skeletal remains.

The first documented appearance of the personage Saint Nicolas was in 1360 A.D. somewhere in Germany where he materialized at a festival and rewarded good children with money and gifts. In 1427 a Catholic community in the Netherlands invited the town’s impoverished to leave their shoe at the church overnight. The rich then brought gifts and alms and the church distributed these equally among the shoes. On December 6 the needy collected, this being officially declared Saint Nicolaas’ name day throughout most of Europe.

The Tradition Continues
During the 16th century ‘shoe-setting’ became more of a tradition in wealthier households as a way to reward children for good behavior, Sinterklaas believed to be the never-seen provider. In 1850 a lot changed about the customs of 5/6 December. A Dutch book was published, introducing a black servant to the old Saint. At this time Sinterklaas was a bogeyman to children, stern and severe, only rewarding those who lived by the rules of Catholicism. 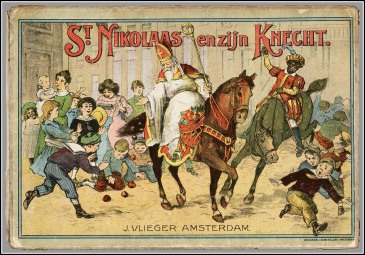 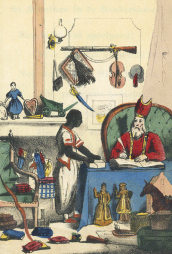 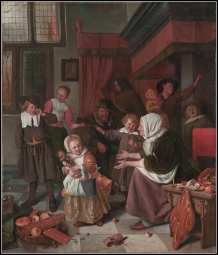 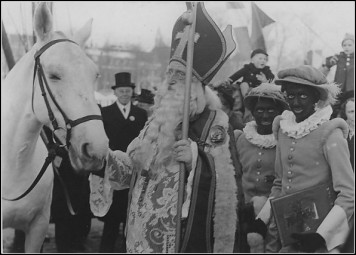 1930 Arrival of Sinterklaas in Volendam, Netherlands.

The first reenactment of the arrival of Sinterklaas by boat was around 1888. In this video you can get a wonderful idea of it. Notice the Zwarte Piet hitting people with his bundle of twigs. And while most other countries in Europe also celebrate Sinterklaas, they’ve kept different habits, all involve a threatening dark-skinned figure at Sinterklaas’ side. But only in the Netherlands, Belgium and some areas of France the appearance is based on an African servant’s look. 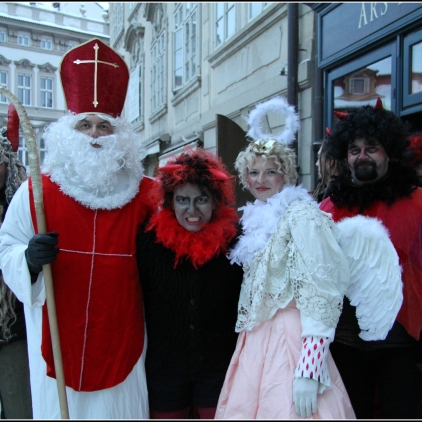 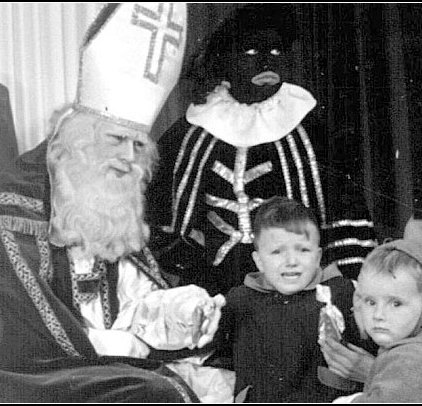 Look at those faces… They’re about to cry 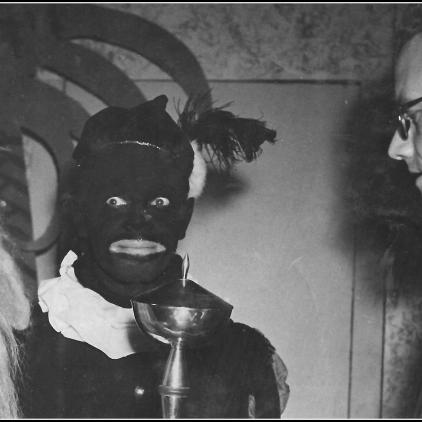 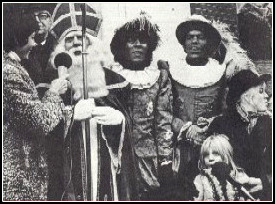 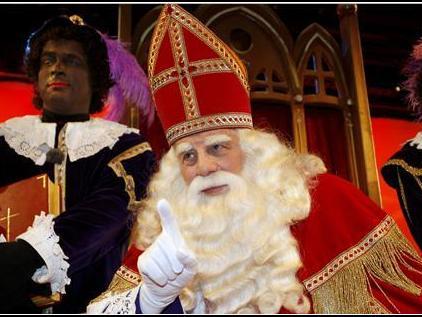 Nowadays, esteemed actors have taken on the roles of the ‘official’ Sint and Piet. 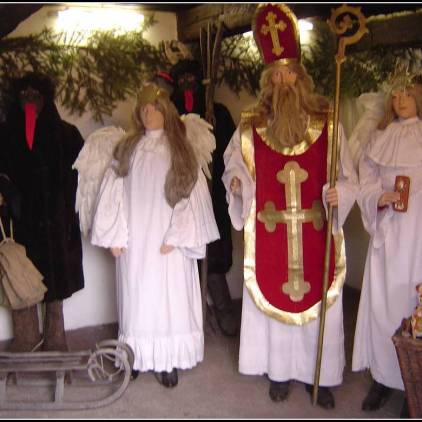 This small church in eastern Europe displays these guys. (Notice Wodan in the back.)

Piet
After being introduced to the tradition in 1850, Sint’s helper has been given many names but became best known as Zwarte Piet (Black Pete). Around that time it was not uncommon to have a black helper in the Netherlands. However, many attributes of Zwarte Piet are much older than 1850 and have nothing to do with slavery. These features trace back to ancient Germanic and Nordic folklore.

Wodan was a Germanic god and much like Piet would punish children by hitting them with a bundle of twigs (roe). Our Wednesday is Wodan’s-day, in case you’re interested. Similarly, Gryla is a Nordic ogress who has the ability to detect which children are misbehaving year-round. In December she comes out of the mountains to get ingredients for her favorite dish: A stew of naughty children, which she carries away in a bag. Her name literally means “threat” or “threatening“.

After WWII Sinterklaas started showing up with multiple helpers. They knew everything you’d been up to all year and would deliver punishment without hesitation, so you clearly remembered that time you stole a cookie from the cabinet. When I was young in the 90’s, Zwarte Piet was just transforming into a slightly more likable character. Children older than 5 are usually not frightened of Piet anymore. 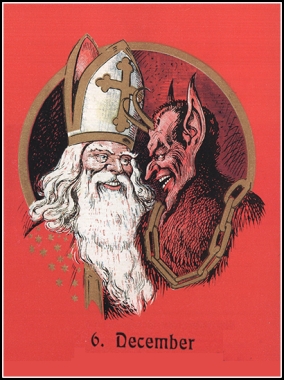 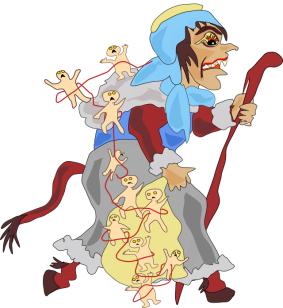 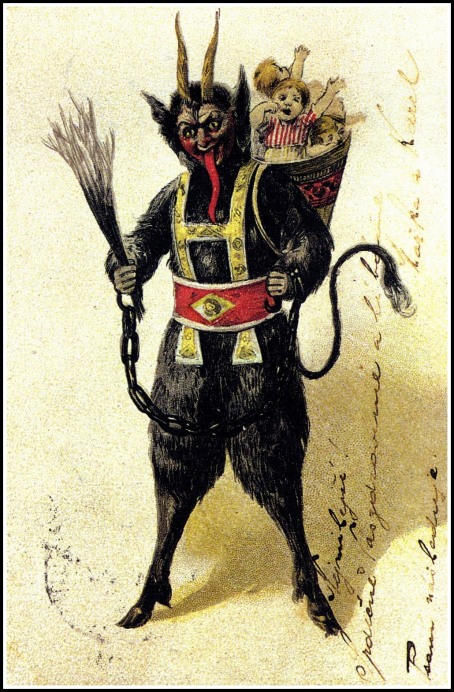 Wodan. Notice the bag of screaming children, bundle of twigs and black appearance 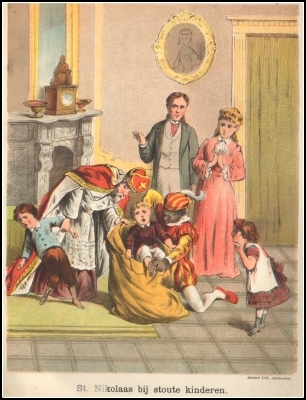 This is what you’d fear happening. (A bit more terrifyin than a lump of cole.)

Nowadays
After WWII wealth grew across Europe and most families could afford to celebrate Sinterklaas. The tradition was turned into a longer happening of about two weeks instead of just one day.

The arrival of the steamboat holding Sinterklaas, hundreds of Black Petes and all the children’s gifts has been broadcast on national television since 1985. The mayor comes out and thousands of children sing and cheer. Sinterklaas arrives mid-November and stays through December 6. Established Dutch actors have played the ‘official’ Sint and his Petes, sometimes for 20 years or longer. Children can set their shoe for small treats at night and usually get some candy. If there is no chimney in the house, shoes may be left at the heater, backdoor or a window. The day before Sinterklaas’ departure is gift night (Dec. 5) and after a knock at the door — curiously always while dad’s putting out the trash — there is a burlap sack full of poems and gifts for everyone. Sometimes Sint and Piet might come inside and they would look kind of like those people who live down the street.

This is the most popular folk tradition of the Netherlands. It’s celebrated by children and adults, resulting in an excited exchange of gifts at school and work, often with poems or wrapped in hand-made items that connect with the person’s interest. So much for a not so short history on the personae Sinterklaas and Zwarte Piet. Today’s festivities offer a jolly good time, but most people seem to have forgotten the true history of these myths.

The Riots
Zwarte Piet is adored by all children while Sinterklaas is mostly considered intimidating and frightening. I remember being asked as a kid: “Would you like to go dressed up as Sinterklaas or Zwarte Piet?” And like most of the kids in school, I would want to be Piet. Zwarte Piet is an acrobat, he juggles and sometimes we would wrap paper across the trash bin so he’d think it was a chair and fall through it. I myself was honestly obsessed with Piet, drawing his picture year-round or maybe it was the candy that intrigued me.

Here is the interesting part about these black helpers; they’re always played by white people wearing blackface complete with gold earrings and red lips. This has attracted international attention a few years ago and caused global consternation as it is considered an insult to black people and has been unacceptable for decades. There is a dark (no pun intended) history of blackface that still haunts America. Children nowadays are told Piet is black because of the soot he accrues when climbing down the chimney during night-time to leave gifts, though it doesn’t quite explain the Afro hair, colorful attire, gold earrings and big red lips.

Last year the UN Human Rights Council demanded answers to five questions regarding the tradition in a letter directed to our Prime Minister (see below). Now my country’s people are separated in for Pete and against. Riots, demonstrations and television debates are lacing the festivities. A lot of people feel upset that their favorite festival has taken this serious turn and a dark shadow is cast over it all. So the Prime Minister is speaking about it, song texts are being altered, Zwarte Piet is called just Piet without the adjective Zwart (black) and there were red, yellow, purple and all-white Piets, or lightly sooty ones. I’m all for refreshed critical reflection and suitable evolution of the festival, but only at the pace of the people whose tradition it is. Not under stress of international criticism.

Meanwhile, the children are all confused why their parents won’t let them go dressed up as Zwarte Piet anymore when Sinterklaas comes to town. When history books teach of the enslavement and servitude of Africans, you’ve already been exposed to Zwarte Piet for over eight years! You think “Those people in the book look just like Zwarte Piet. I want to be near these people, because I like Zwarte Piet”. Remember that Zwarte Piet is all-knowing and likeable. I would even go as far as saying that the early introduction of a positive black figure to children may well leave them with a beneficial prejudice. Truth be told, in the end you could find something wrong with all folklore. Let’s look at the real social dynamics here and you’ll find that actual racial discrimination in the Netherlands is pretty uncommon. So let’s keep that in mind and let traditions be.

Several years after the start of this debate, there are still demonstrations each year at the official arrival of Sinterklaas. However, serious changes have been made to the tradition and Petes are black, white, or covered in soot — which is now considered to be the cause of Pete’s blackness. Interestingly, this year there was a group of men in suits added to the crew who were in charge of Sinterklaas’ luggage. They were also of all skin tones and showed that servants can be dressed well, of all race, and don’t need to be silly. Songs written 150 years ago have been edited to avoid the phrase “black Pete” or “servant”. The main Petes that have always been black, still are. I think this adjustments has been embraced or at least accepted by all of the Netherlands. It may not be enough to some — it may never be, unless no black people are portrayed as servants — but to me it feels like a thoughtful and surprisingly speedy effort to accommodate the world’s new awareness of the tradition. 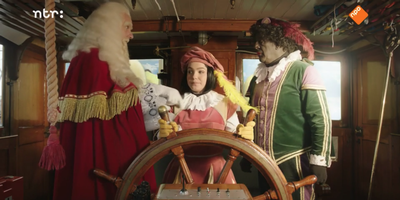 “Sad Pete” takes the wheel. The guy on the right has been the “Head Pete” for many years. 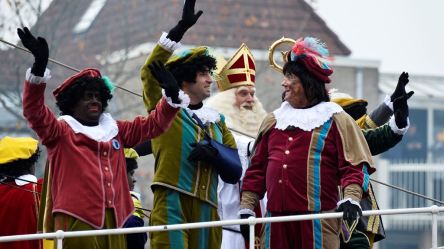 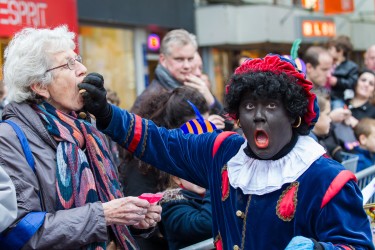 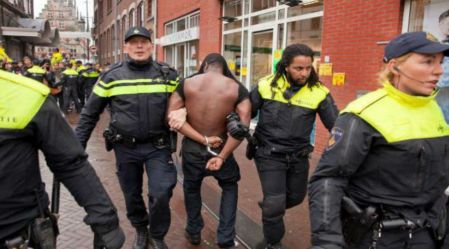 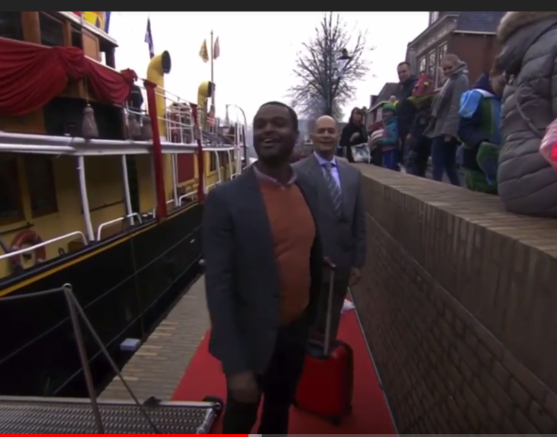 The other helpers with Sinterklaas’ suitcase.